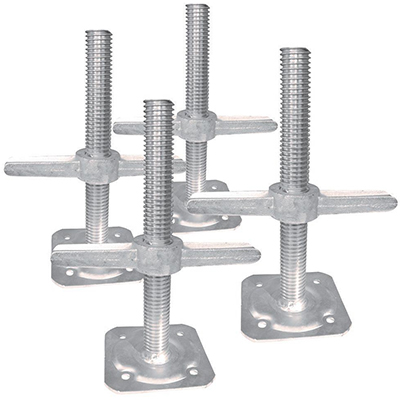 Scaffolding Adjustable Base Jack is used as the base which holds the standard or the formwork of the scaffold, adjusting the height of the scaffold as well as making the whole scaffolding more stable.

Scaffolding screw Jack base /pipe screw jack base /U-head screw Jack/head jacks/ Scaffolding leveling jack, made in Queen Group is 100% proof tested for complete safety. And we strictly control the quality of every piece of the screw jack, according to the standard: EN74, IS09001: 2000, BS1139. Reliable performance and Corrosion resistance of queen screw jack praised by customers.

Base plates in various lengths are available to compensate uneven scaffolding foundations. The base plates thread is cold formed and rounded to allow the wing nut to be quickly screwed up or down, while also making cleaning easier. It is important to note the 25% of the base plates length or at least 15 cm should always be in the scaffold standard.

Head jacks are used to support the timber or steel beams on top of scaffolds, also the thread is cold formed which can supply high loading capacity. adjustable scaffolding hollow jack base, Jack base is used with all scaffold systems and formwork systems.